In Out hammer curls are a variation of the traditional dumbbell hammer curl that varies the form within a set to add total work.

Whether intended or not, the In Out hammer curl also involves the shoulder somewhat as it rotates the upper arm bone to the side for the Out portion.

It is technically two reps in one and not two half-reps, so it doubles the work, making it more of a metabolic option rather than a straight-up muscle builder.

We tried them out so we could speak knowledgeably about them. Now that we’ve experimented with them, we can give it to you straight.

First, we’ll cover what In Out Hammer Curls are supposed to work and how they’re intended to be performed.

Later in the article, we discuss the benefits and drawbacks and even highlight some misconceptions people might have about the movement.

Because the biceps brachii are responsible for raising the forearm, they also work of course but are a bit less involved (and we mean only a bit) because the forearm is not supinated (turned palms-up).

A well-developed brachialis and brachioradialis helps build thickness around the elbow and proximal forearm where the forearm meets the elbow and makes for a cosmetically appealing arm in general..

Proponents of In Out Hammer Curl promote it as an effective way to build the arms because of extra stretch they say the biceps receive during the Out portion of the move.

Having tried the movement ourselves, we’re comfortable saying that you should not expect to get any additional size on your arms simply due to reps performed with forearms flared to the side than you would from any hammer curl variation.

You can however anticipate shoulder pain and tendon inflammation. See Drawbacks below for more on that.

How to Do An In Out Hammer Curl

The In Out Hammer Curl alternates shoulder position to form the In and Out portion of the rep.

To do an In Out hammer curl:

You can do In Out hammer curls single-arm, or both arms at the same time.

In Out hammer curls are a way to add variety to a high-rep set you would be doing anyway.

Some lifters perform hammer curls with forearms ever-so-slightly swung out to their sides anyway because they find this more comfortable for their shoulders. This of course is fine. The motion itself should feel natural. Hammering is an activity people do every day and hammer curls follow that pathway of motion.

If you experience discomfort in the anterior shoulder, this is probably due to the short and long head biceps tendons (especially the short head) being stretched across the bony surface of the upper arm (head of the humerus).

Pain in the side or posterior shoulder can be caused by the load rotating the shoulder joint forward into prolapse, meaning the shoulder rolls forward. Many people’s shoulders are already prolapsed from extended hours at desk jobs and slumping over their electronics.

How NOT to Do a In Out Hammer Curl

If you opt to do In Out hammer curls, here’s our best advice for what not to do.

Don’t externally rotate more than about 45 degrees on the Out phase. The less outward rotation, the better. Rotating way out to the side invites unnecessary wear and tear on the origins of the biceps at the shoulder.

The in out hammer curl should be done in the strictest manner possible. Let’s not kid ourselves by swinging those dumbbells to achieve full range of motion. The only reason you’re doing that is because:

Using momentum is cheating the movement and will provide you no more gains than if you were to use lighter weights with strict form. So leave the ego at the door and lift those weights proper form – the more this is the done, the more gains you will see, and the heavier you will be lifting.

The elbows should be locked in to your sides as if they were nailed to you. Many lifters, even experienced ones, move their elbows upwards as they curl the dumbbells up.

This is not the correct way to curl because it shortens the leverage arm (your forearm) horizontally which effectively means you’re more able to support the weight of the dumbbells. This ends up making the lift easier and lessens the work you have to do to achieve full range of motion. No work, no pain, no gain!

Only the forearm should be moving during the in out hammer curl with the elbow acting as a hinge. If the elbow needs to move in order for the full curl to be executed, then the dumbbell weight is too heavy.

Hammer curls should always be performed with the wrist in direct alignment with the forearm. No one hammers a nail by letting their hand fall forward midway through the stroke.

Do not train past pain

If you do elect to do In Out hammer curls with any regularity, chances are pretty good that you’ll begin to feel anterior shoulder discomfort. If you do, stop.

Benefits of In Out Hammer Curls

After experimenting, we found one benefit to the In Out hammer curl:

Others who’ve described the In Out hammer curl advocate for two benefits that–in our studied opinion–are not supportable as benefits. They are:

OK, what about those “benefits”?

What About “Varying the Planes of Motion”?

Varied planes of motion are purported to work the muscle in different ways. Altering a plane of motion for a exercise has some validity when discussing compound movements, such as lunges.

In the example of a lunge, the lunge is a compound motion that involves the glutes, the hamstrings and other posterior leg muscles, to to a smaller degree the muscles of the lower leg as stabilizers. There are also degrees of work required by the core, front and back.

The lunge can be performed in the sagittal plane (forward and reverse lunges), the frontal plane (side lunges) and the cross-over “skater” lunge (transverse).

Each of these works the active muscles to greater or lesser degrees due primarily to how the leg must deal with the forces of locomotion and ground force absorption.

In an isolation movement like the hammer curl, only one joint is in use, meaning that the same muscles are in use no matter which direction you turn the forearm.

The biceps, brachialis, and brachioradialis have only a couple of jobs in life. Those are to flex the forearm and bring your hand toward the head and shoulder and other points along the way.

You can see this action for yourself. Moving only your hand, turn your palm up toward the sky and see what your biceps muscles do. You’ll of course see the biceps ball up.

Those muscles do not rotate the arm out to the sides. The muscles of the posterior shoulder do that?

Do In Out Hammer Curls Work the Shoulder?

We’ve all seen people in the gym holding a dumbbell with arm bent 90° while in a standing position, rotating the forearm right and left in the belief that they are working their rotator cuff muscles.

This logic is applied by advocates of the In Out hammer curl. By swinging the forearm to the side, the idea is that the rotator cuff is working to do so. Partially true. The infraspinatus must exert some force to rotate the upper arm outward to the side.

Although the infraspinatus  must pull on the upper arm bone to rotate the arm out to the side it is not working against resistance. The infraspinatust pulls left-right and not up-down.

To illustrate why this is–well, silly–let’s flip the example on its head.

Would you ever lie on your side to do dumbbell curls? Never. You’d get laughed out of the gym. You wouldn’t be working the biceps in alignment with gravity.

So why would standing in a hammer curl position and rotating the forearm outward be any different, when the muscles that do the rotating (left-right) aren’t working against resistance (which is up-down during a hammer curl).

When examined using physiology and biomechanics, there are significant drawbacks to the In Out hammer curl.

The issue with In Out hammer curls is that the Out portion–particularly as described by some–puts the forearm nearly parallel to the torso, straight out to the sides. This stretches the tendons a lot and the biceps muscles not-so-much.

The tendon of the long head of the biceps runs over the top of the humerus (upper arm bone) and the short head’s tendon passes in front of it.

By externally rotating the shoulder so that the forearm and hand are off to the side, the short head tendon is not only stretched but is now positioned in frictional contact with the head of the upper arm bone.

Isn’t more stretch better? Well, yes…sort of, but not all stretches are equal.

In Out hammer curls stretch the tendon and not the biceps, and besides, they provide no additional stretch for the brachialis and brachio-radialis, which are the muscles hammer curls are intended to focus on.

Your biceps, brachialis, and brachioradialis will be stretched sufficiently using a natural curling motion without the addition of an exaggerated Out motion.

If more reps are what you’re after for metabolic benefit, simply do more reps and forget the out-to-the-side portion.

Other that adding interest and faking yourself out to do a higher rep set, frankly, In Out hammer curls are pretty much a waste of time and energy as compared to a plain, vanilla dumbbell hammer curl, and worse, could lead to a lay-off while you heal from tendon pain or injury.

It is an Unnatural Motion

The hammer curl is so named because its motion mimics that of wielding a hammer to drive a nail.

No one drives a nail by turning their body to the side of the target. A journeyman carpenter would be fired immediately if the master carpenter saw them doing so.

Sometime beginning around the year 2000, the fitness industry started promoting extreme, unnatural, contortionist exercises as somehow being better for developing the body.

There’s really no way to respond to this other than to say that this notion is ridiculous.

Our assessment: The In Out hammer curl is a highly-suspect knock-off of a very good upper arm exercise, the dumbbell hammer curl.

The brachialis and brachioradialis experience no additional stretch of any kind during an In Out hammer curl.

The target muscles receive more than enough stretch when performing a hammer curl using the traditional form where the arm is raised and lowered through a full range of natural motion.

If higher rep ranges are the goal, simply do more reps.

The hammer curl motion should feel natural, yet reasonably challenged by resistance.

If you must alternate In and Out hammer curl positions, use a reasonable degree of shoulder flare on the Out phase that’s comfortable and don’t fool yourself that you’re deriving benefit from pain.

Stop immediately if you feel any discomfort in the shoulder. 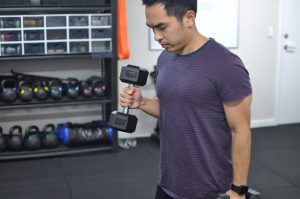